I am 41-years-old and was born June 6, 1972 in Lvov, Ukraine. In 1981 my family immigrated to the United States.  I stay busy as a high-end kitchen designer, a wife, and a mother to three wonderful children. Chanel, my oldest, she is 19 years old…A Sophomore and part of Sorority in University of Arizona. Kyle is my 18 year old Hockey player…at the moment he plays AAA ice hockey.  My biggest fan of all is my 10 year old daughter Taylor. Not only is Taylor my biggest fan, she helps me with my T-walks and posing.

I was diagnosed with Graves’ disease 14 years ago. I underwent radioactive iodine radiation, which killed the function of my thyroid. Over this time, I gradually put on about 10 lbs. and a lot of cellulite.

About 4 years ago I developed fibromyalgia; an annoying numbing pain that began in my right shoulder and over years has traveled through my entire arm and to my head, causing severe headaches.

Having gone through Graves’ disease, nuclear radiation, and being on Synthroid medication for the rest of my life, I was afraid to take any extra medications for the fibromyalgia.

I decided to join a gym. I was fortunate to find a great local gym in Marlboro, NJ, with extremely knowledgeable trainers. Remember, due to my fibromyalgia, I cannot lift weights. I don’t train with machines. I don’t even know what to do with them. I began my training with an MT, level 4 Z-health practitioner, and a certified RKC trainer. My training regimen is called Advanced Joint Mobility. It’s basically body alignment correction and body weight training.

Excited with the success I was seeing, I was ready for the next step!

3 months later I joined a life-style program called “The Ultimate Transformation Challenge.” There I learned the proper way to eat. I gave up dairy, gluten, soy, and sugar. I began to take in complex carbs and lots of good protein. I did look forward to my cheat meals.

What a great success this program was for me! My random allergies disappeared, my fibromyalgia pains got less and less, and I lost my ugly cellulite.

And the sculpting of Charina’s X-frame began.

All of my work outs are resistance based and use my own body weight. Therefore, I have full control of every muscle. I use Kettlebells, dumbbells, Bulgarian bags, sand bags, bungee bands, and ladder bands. I also use a prowler and sled. When I describe this work out method to others, I say, “I’m not being built, I’m being sculpted.”

Around this time, Jody Phillips (the co-owner of the gym), who is now my best bud, was preparing a few girls a for a figure competition. Jody noticed my interest and asked me if I want to join. The idea of being on a stage, competing, and wearing an itsy-bitsy “swarowskied-out” bikini totally had my attention. Right then and there I had a vision… RED suit, RED lipstick, and my signature PONYTAIL.

In April 2012, I entered my first figure show in Burlington, NJ.  Not knowing what I was up against, I went there to have a good time. To my surprise, I took 1st place over all!

I enjoyed it so much that I wanted more. My goal was to compete as a Pro in the Yorton Cup at the end of October, 2012. However, to qualify, I would first have to get my pro card, and then finish top 5 in a pro show. So Jody and I went on the OCB website and planned my schedule.

At the end of August that I won my pro card in Burlington, NJ. 3 weeks later, in Kansas, I qualified top 5 in my first pro show! With my mission accomplished, I went to Arizona to compete in the Yorton Cup!
But my journey only got better. I placed 5th at the Yorton Cup.

To say I’m happy is an understatement. For those that know me; you know exactly how I react when I’m full of excitement. 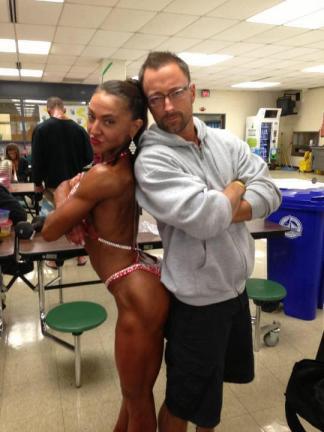 Along this journey I have met many amazing people.
Kaelin Patterson – always there for me, always tries to help me.
Ben Yosef – gave me a cover page in his Natural Magazine International. A few months later Ben gave me my own cooking column “Translating with Charina”. (BTW, thank you Kaelin for introducing us 😊😊😊)
Steve Pucciarelli –  the sculptor of my upper body
Matt Maher – the sculptor of my lower body (my quadzillas) lol

However, I am still not done yet. And I’m certainly not done meeting more amazing people!!!

At a moment I’m in the middle of publishing a digital cook book. “Charina’s Guide to a Svelte Body”. My inspiration came from hating to eat the same dry chicken and veggies over and over again. I love my food to taste good, and have a great presentation. So I took it to the next level and began to translate yummy/unhealthy recipes to yummy and super clean recipes.

Here is my proud Competing resume